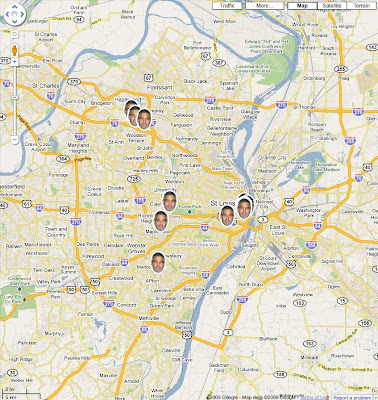 After I handed my movie ticket to the attendant, and as I fumbled through the aisles with a giant tub of over-buttered popcorn and a cumbersome soda, I finally settled into a coveted seat amongst one of the comfy leather couches at the Moolah Theatre in St. Louis (www.stlouiscinemas.com/moolah/). I could not be happier; I was just about to watch the movie I had been anticipating for almost one full year. In March of 2009, word spread rapidly around St. Louis that George Clooney was in town, shooting his newest film, “Up in the Air.” The news of where exactly Clooney was filming each day spread like wildfire, thanks to various media outlets. A fellow Seminary co-worker and I even took a few lunch break trips to go “Clooney-spotting.” Unfortunately, we didn’t ever catch a glimpse of George out on the streets of St. Louis. But I didn’t care now because today I was going to finally see the completed film on the big screen!
2 hours later…
A-MAZE-ING. The movie could not have been better; totally worth the $7 admission price. In my opinion, the best parts of the movie were, of course, the scenes filmed in St. Louis. Many of the locations were very recognizable to a native St. Louisan; Affton High School, Cheshire Inn, Lafayette Square, Mansion House, Maplewood United Methodist Church, Renaissance Grand Hotel, and the most obvious, Lambert Airport.
Many people assumed the Gateway Arch would not be depicted in the movie, considering “Up in the Air” is supposed to be set in Omaha, Nebraska. Nonetheless, I did catch a glimpse of the unmistakable 630 foot tall monument out one of the windows during a scene which was actually set in St. Louis.
Lately I have heard some Oscar-buzz surounding the release of this movie. And while I totally agree with all the hype and good reviews of “Up in the Air,” I will be the first St. Louisan to admit that I would’ve liked this movie no matter what, solely based on the fact it was filmed in St. Louis.
“Up in the Air” opens nationwide on Christmas Day 2009. However, if you’re like me and live in St. Louis, you’ve been lucky enough to have the opportunity to see this movie since early December!
So…when is Johnny Depp filming his next blockbuster here???