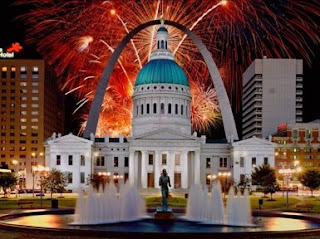 The United States is truly a diverse nation made up of dynamic people. Each year on July 4, Americans celebrate that freedom and independence with barbecues, picnics, and family gatherings. Independence Day in St. Louis means parades, music, fireworks and fun. There are dozens of places throughout St. Louis to gather with family and friends to celebrate all things American. Of those dozens, here are my top recommendations on where to spend your 4th of July 2009 in the St. Louis area:

1. Fair St. Louis
Fair St. Louis festivities are July 3 & 4 on the Arch grounds and St. Louis Riverfront. The Fair opens Friday night at 6 p.m. and again at 11 a.m. on Saturday after the VP Parade. Most visitors plan their day around the free concerts and fireworks. The Counting Crows and Train are this year’s headliners. And of course the Fair’s fireworks display is not to be missed!

3. St. Charles Riverfest
Riverfest is held each year in Frontier Park on the banks of the Missouri River, and includes a bluegrass music festival, carnival rides, a parade and two nights of fireworks.

5. Fireworks Over the Confluence, Grafton
In Grafton, the fireworks display is over two great rivers, right at the confluence of the Mississippi and Illinois. Grafton’s festival also includes live music, children’s games and food and drink specials from Grafton area restaurants.

6. Hertiage & Freedom Fest, O’Fallon, MO
The two-day celebration features an impressive line up of nationally known musicians, including Craig Morgan, Chris Young, Gavin DeGraw and Sister Hazel. Of course there’s also a parade, a carnival, plenty of kids activities and tons of food. To top it off, the festival ends each night with fireworks.

8. Rockin’ on the Landing
Top local bands will be playing on outdoor stages from noon until 9 p.m. Street vendors will be selling all kinds of food or you can always stop in at one of the Landing’s many restaurants. This is also a great location to watch the fireworks from Fair St. Louis.

9. Gateway City BBQ Festival
Few things are more American than bar-b-que and live music! The Old Rock House is known for its live music and there will be plenty of it during the festival from bands like Paint the Earth and That ’80’s Band.

10. Fireworks Over Chesterfield
The City of Chesterfield is hosting its annual 4th of July celebration in the parking lot at Chesterfield Mall. There will be activities for the kids and food for sale, but you can also bring your own eats. The evening will end with a traditional fireworks display.