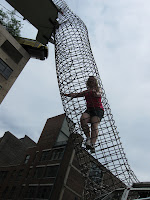 The 2009 May issue of Delta Airlines in-flight magazine (Delta Sky Magazine) lists the City Museum in St. Louis at #6 among “30 Must-See Museums.”

Imagine if you let engineer-artists, free to create whatever they want, be spontaneous, take risks and play. And imagine a museum that figures people won’t mind getting really dirty or rather wet during their visits, and you have St. Louis’ City Museum.

City Museum dares visitors to test their limits by climbing five stories through a giant steel slinky suspended in midair, or eschewing the stairs in favor of sliding several stories down a narrow chute instead, or standing on the wing of a jet airplane five stories high. Screams of fear are heard here almost as often as shrieks of delight. 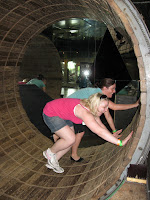 “The museum is a happy hybrid of solid grown-up engineering skills and childlike raw creativity,” said Elizabeth Parker, City Museum director. “Our staff of artist-engineers, welders and construction experts builds totally on impulse. They build whatever they want to build, whenever they want to build it. The museum changes on a daily basis due to the staff’s spontaneous and constant bursts of creativity.” 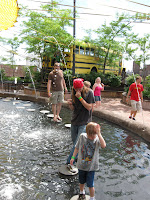 headquarters. “Virtually everything inside the building was created from recycled industrial and commercial refuse, much of it donated,” said Parker. “The entire museum is itself a work of art.”

You really have to see the museum in person to believe it. The museum is open seven days a week, with Fridays & Saturdays staying open until 1am. Try riding the rooftop Ferris wheel surrounded by the starlit sky and the 360 degree view of the nighttime downtown skyline!